Even the greatest of the datacenters must have been taken aback when Google reveals its once-secret servers. It’s really amazing and hair raising fact that Google has been designing and building hundreds of thousands its own servers. The news was revealed by cnet on 1st

of April in an article written by: Stephen Shankland. 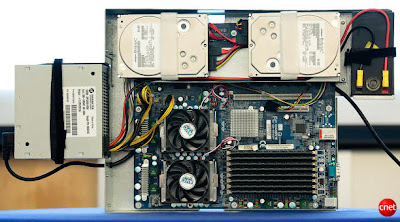 Here are some of the amazing facts and secret which came before the world:

Most companies buy servers from the likes of Dell, Hewlett-Packard, IBM, or Sun Microsystems. But Google, which has hundreds of thousands of servers and considers running them part of its core expertise, designs and builds its own. Ben Jai, who designed many of Google’s servers, unveiled a modern Google server before the hungry eyes of a technically sophisticated audience.

Google’s big surprise: each server has its own 12-volt battery to supply power if there’s a problem with the main source of electricity. The company also revealed for the first time that since 2005, its data centers have been composed of standard shipping containers–each with 1,160 servers and a power consumption that can reach 250 kilowatts.

It may sound geeky, but a number of attendees–the kind of folks who run data centers packed with thousands of servers for a living–were surprised not only by Google’s built-in battery approach, but by the fact that the company has kept it secret for years. Jai said in an interview that Google has been using the design since 2005 and now is in its sixth or seventh generation of design.

“This is much cheaper than huge centralized UPS,” he said. “Therefore no wasted capacity.”

Efficiency is another financial factor. Large UPSs can reach 92 to 95 percent efficiency, meaning that a large amount of power is squandered. The server-mounted batteries do better, Jai said: “We were able to measure our actual usage to greater than 99.9 percent efficiency.”

Shipping containers
Most people buy computers one at a time, but Google thinks on a very different scale. Jimmy Clidaras revealed that the core of the company’s data centers are composed of standard 1AAA shipping containers packed with 1,160 servers each, with many containers in each data center.

Modular data centers are not unique to Google; Sun Microsystems and Rackable Systems both sell them. But Google started using them in 2005.